Make your own Enigma Machine, the famous encryption device used during World War II. This fun activity puts encryption/decryption methods in a historical context and also can lead to discussions about how modern day encryption technology works. 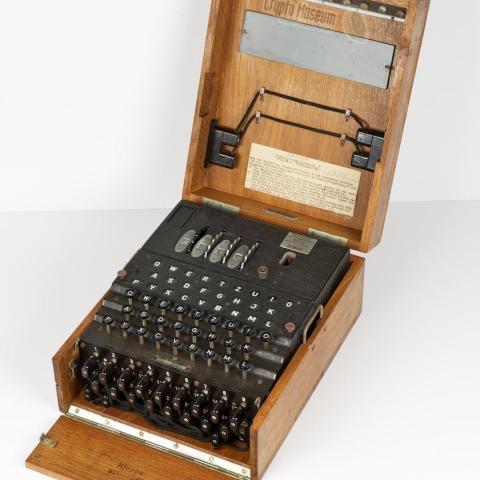 The Enigma was an encryption machine famously used by the German military during World War 2. The power of the Enigma came from being simple for the operator to use but difficult to determine the encrypted letter for any input letter. The number of possible ways to jumble a message through an Enigma was nearly 159 quintillion. Thanks to incredible mathematicians in Poland and tenacious work by the British at Bletchley Park, the Allies broke the Enigma code. This gave the Allies the ability to read top secret communications during the war and greatly disrupt the Nazi German war machine.

The Enigma was an electro-mechanical machine similar to a typewriter. The most simple models had three wheels on top of the case that allowed the operator to set internal rotors into a certain position. The operator would press a key on the keyboard which would activate an electric circuit and light up a different letter. For example, a T might be pressed but the letter G would light up.

Soldiers in the field and sailors at sea would set their Enigma machines’ rotors to the same as the person sending a message. They would copy seemingly random letters via Morse Code from the radio. The Enigma operator would then key in each “random” letter and write down the resulting letter that was lit up on the machine. Each key press on the keyboard would turn a rotor one step and provide a new, different path for the electricity to flow inside the machine.

Thanks to the work of British mathematician Alan Turing, the Allies developed The Bombe, a top-secret electronic machine used to quickly try every possible combination of letters in order to crack the Enigma code. This gave the Allies the ability to quickly read German encrypted messages and help win the war. The Bombe was an incredible feat of engineering and the predecessor of the first true electronic computer named Colossus. Colossus was used to crack the Lorenz cipher which was an even more complex than Enigma. However, because Colossus was classified, the University of Pennsylvania’s ENIAC was publicly given the crown of “first computer.”

The Enigma remains perhaps the most popular encryption device in history. There are countless stories of other encryption techniques, but none has intrigue and impact that the German Enigma had during World War 2. What follows will guide you through the creation of your very own Enigma machine. 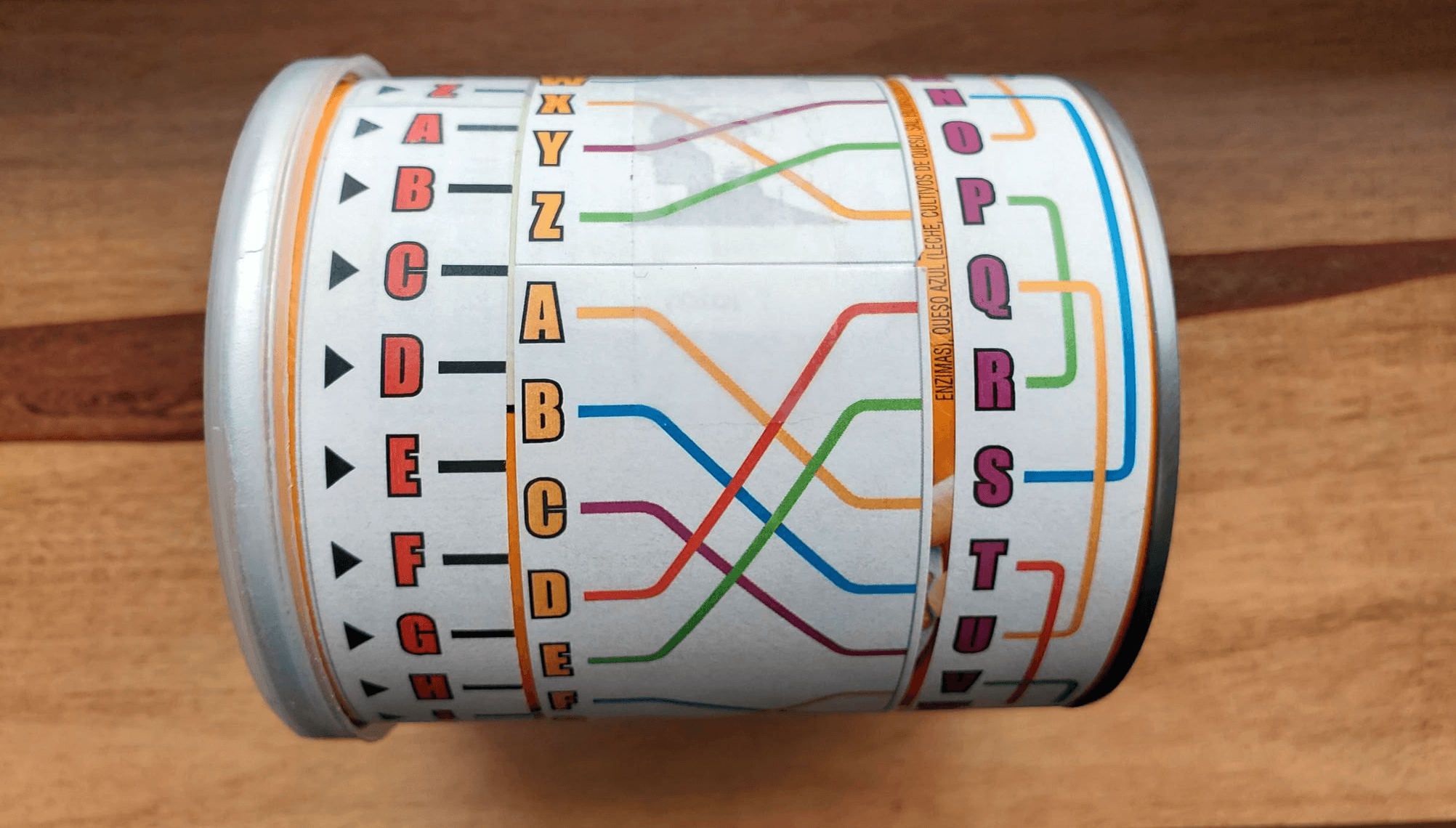 Section Title
How to Use
Accordion Items
Title
Encryption
Content

There are many start positions each rotor and the reflector can be set for. Align the rotors so all the A letters line up. Aligning the Input; Rotors 1, 2, 3; and the Reflector at Input position A is said to be set to A-A-A-A-A. Later, the start positions of each rotor will change, but for now leave them all aligned with A.

After you get an output letter, rotate Rotor 3 on letter “up”. The rotors are now A-A-A-B-A. To encode our next letter, locate the letter C on the Input rotor. Trace it across rotors 1, 2, and 3, through the reflector and back through 3, 2, and 1. The output letter should be B.

Shift Rotor 3 “up” one time (because we got our output letter from before). The rotors are now A-A-A-C-A. Encode the letter E by finding it and tracing the path to and from the Reflector. The output letter should be V.

The word ACE when encrypted through this setup of the Enigma is LBV.

Because the message was encrypted with rotors in position A-A-A-A-A, it is important that the Enigma starts with that position. The first letter of the encrypted word is L. Trace the path from the Input rotor from L across Rotor 1 to M on Rotor 2, then to K on Rotor 3, and through L on the Reflector. On the Reflector, L reflects back to G, then to D on Rotor 3, then to C on Rotor 2, and finally to A on Rotor 1 which is aligned with A on our Input rotor. So the decrypted first letter is A.

Remember to shift the third rotor one step after each output letter. The next encrypted letter is B which follows the path D to F to B on the reflector, then out from D to G to E to C for the return path. The next decrypted letter is C.

Shift the third rotor once then trace the final letter, V, through the path. V connects to S to W to X on the reflector, then out from Z to C to B to E for the return path. The final decrypted letter is E.

Notice that the Input and Reflector do not rotate when encoding or decoding. Once those two are in position, they should remain in that position. When you turn the rotor next to the reflector, be sure the reflector has not accidentally turned also.

If all messages were sent with the same rotor settings (A-A-A-A-A), it would not be difficult to decrypt the message – everyone would have the same encryption mechanism. Designers of the original Enigma knew this and made it so you can set the rotors to whatever configuration you choose. As long as the recipient knows which rotor settings to use, you can decrypt the message.

Try this for practice:

Now, just as before, decode the following message and remember to turn Rotor 3 one step after each letter is encoded or decoded.

The message to decode is BVHFTD

The answer is the 2nd word of the 1st paragraph in the Background section. Did you get it?

If you answered that correctly, try the following Practice section for some more challenges.

*This phrase was the first official first Morse code message transmitted in the US on May 24, 1844.